Welcome to the "Cinco de Mayo" Blog Hop- Hosted by Abby from ScrapbookaholicAbby
If you arrived here from KICH you are going on the right direction.  If you happen to stop by and say hi, don't miss the fun and begin at ABBY's Blog.  Even though I am not of Mexican descent, I have a sister that was born in this beautiful country, and my family and I lived there for almost a year and a half when I was 2 yrs old.  But also Mexico is my neighbor country.  I was born in Central America.  My country is right underneath Mexico making us neighbors.  Guess what country I come from?...correct Guatemala.  I was born there but  raised in the US.  So yes my native language is Spanish.  I read it, write it and speak it too.  Well to commemorate this day and go with the theme of the hop I created a card that shows a little bit of Mexico....I love Piñatas so I decided to make one with Quilling. This would be the first time I make a Quilled pinata, I like the outcome, what do you think?

Cardstock- Stampin' Up
Pinata Embellishment- 1/8" Quilling Paper
Border Stamp- My Creative Time- My Little Firecracker
There is awesome Blog Candy over at Abby's.  For more chances at winning any of  these goodies simply leave a comment at every stop, it cannot get any easier!  Abby will randomly pick winners from all the blogs in this hop.
Thank you for stopping by and your Next Stop is MONICA
If you are wondering why the Cinco de Mayo celebration here's a brief about this day:

Cinco de Mayo (Spanish for "fifth of May") is a holiday held on May 5 that commemorates the Mexican army's unlikely victory over Frenchforces ...at the Battle of Puebla on May 5, 1862, under the leadership of General Ignacio Zaragoza Seguín. It is celebrated primarily in the state of Puebla and in the United States. While Cinco de Mayo sees limited significance in Mexico itself, the date is observed nationwide mostly in the United States as a celebration of Mexican heritage and pride. "Cinco de Mayo is not a Mexican holiday—it is an American Civil War holiday, created spontaneously by Mexicans and Latinos living in California who supported the fragile cause of defending freedom and democracy during the first years of that bloody war between the states." Cinco de Mayo is not Mexico's Independence Day, the most important national patriotic holiday in Mexico.
The Blog Line:
Abby~ http://www.scrapbookaholicbyabby.com/
Angelica~ http://www.handmadebyangelica.com/
Erika~ http://www.cricutlove1.blogspot.com/
Gaby~ http://www.gabycreates.com/
Kich~ http://www.scrappykich.blogspot.com/
Linda~ http://www.krazyquilling.com/
Monica~ http://simplycricutting.blogspot.com/
Patty~  http://mynameisscrappy.blogspot.com/
Raven~ http://love4stamps.blogspot.com/
Sandra~ http://www.365daysofcricut.blogspot.com/
Xochitl~ http://cricutcritter.blogspot.com/
Yolanda~ http://www.justyolie.com/
Posted by My Quilling Nest at Thursday, May 05, 2011

Thank you for your comment. They always put a smile on my face! Don't forget to include your blog address so that I can also visit you. Thank you again! 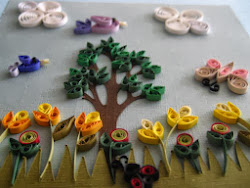 All content including text and pictures are © Linda Krieg. Unless otherwise indicated, some stamped images are © Stampin’ Up!®. The projects shown are for your personal inspiration and may not be copied for publication or contest submission. Thank you!